HAVE YOUR STUDENTS APPLY THEIR FACS SKILLS AT SUNDAY SUPPER

If there’s one thing we’ve learned in the past few years, it’s the importance of togetherness. Families and friends have rediscovered the healing power of spending time together. During the height of the pandemic, many families found their social circles had diminished drastically. After conducting countless classes virtually, you can share with your students that connecting with families face to face is more important now than ever.

Let your students know that any time a family eats together, it’s a chance to talk, laugh and catch up on the day. In addition to having Sunday supper, many families use this day to prepare meals for the entire week. Whether preparing mustard glazed pork chops for Monday, tacos for Tuesday or spaghetti and meatballs for Saturday, cooking together can be a fun way to get the whole family involved. Passing down family recipes can build bonds and make memories at the same time. 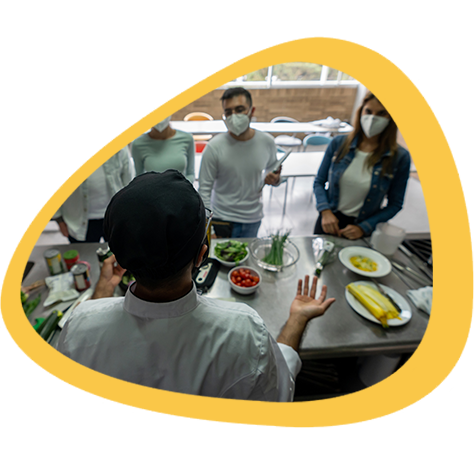 One of our favorite recipes that the whole family can make is Italian Stuffed Pork Meatball Sandwiches. These delicious sandwiches are crowd-pleasers that are perfect for Sunday supper. If your family would rather enjoy a lazy Sunday without the need to prep a lot of ingredients, you could try Slow Slow Cooked Black Bean Pork Chili. There are so many more recipes your students can try at Pork.org! If your school allows, you could have your students bring in one of their favorite recipes for everyone to share. Exploring new foods or discovering that you all share similar tastes can be a great way to get students to connect.

Now, when life is starting to return to “normal,” many families are continuing these traditions as a way to slow down, take a breath and enjoy the simple pleasures of Sunday supper.

THE RELATIONSHIP BETWEEN ENERGY USE AND A CARBON FOOTPRINT

In the United States, most of the emissions of human-caused (anthropogeni) greenhouse gases (GHG) come primarily from burning fossil fuels—coal, natural gas, and petroleum—for energy use. The amount of energy each of us uses, and the resulting release of greenhouse gases, is referred to as our carbon footprint.

In 2019, fossil fuel combustion for energy accounted for 74% of total U.S. GHG emissions. Fossil fuels consist mainly of carbon and hydrogen. When fossil fuels are combusted (burned), oxygen combines with carbon to form CO2 and with hydrogen to form water (H2O). These reactions release heat, which we use for energy. The amount of CO2 produced (emitted) depends on the carbon content of the fuel, and the amount of heat produced depends on the carbon and hydrogen content. Because natural gas, which is mostly CH4, has a high hydrogen content, combustion of natural gas produces less CO2 for the same amount of heat produced from burning other fossil fuels. For example, for the same amount of energy produced, burning natural gas produces about half of the amount of CO2 produced by burning coal.

And there is good news in regards to the energy agricultural industry – specifically pig farmers. Did you know that in the past 50 years pig farmers:

These exciting and fun lesson plans will allow your students to explore even more about the Food, Farms and the Future program. There are two lessons for each main component of the program: Nutrition, Farm Science and Environmental Stewardship. Feel free to use these with your students to broaden their knowledge about how critical farming is to their lives, their families and their communities. 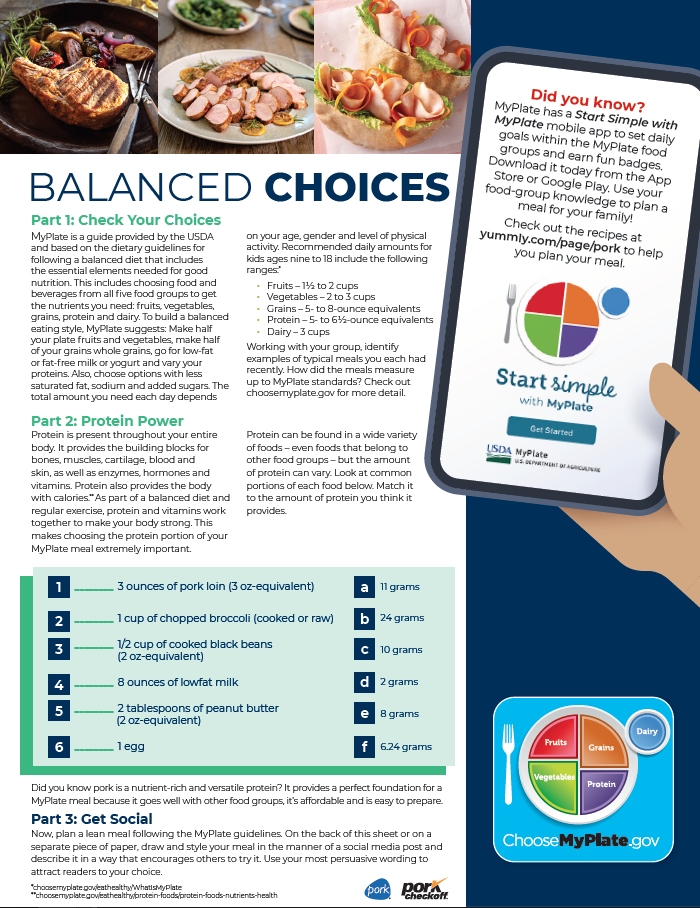 Balanced Choices will help you reinforce the importance of making balanced food choices and how the USDA MyPlate guidelines help them create balanced, flavorful meals. 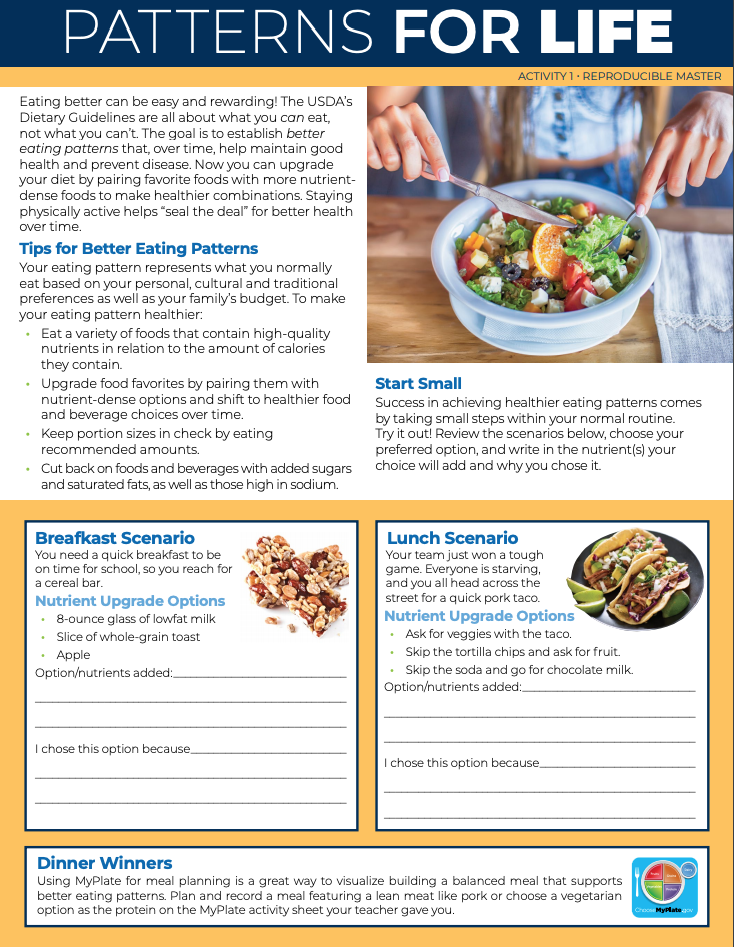 Patterns for Life will help you teach your students about making small changes to their diets to support overall healthier eating patterns. Using MyPlate guidelines, students will practice meal planning with their friends. 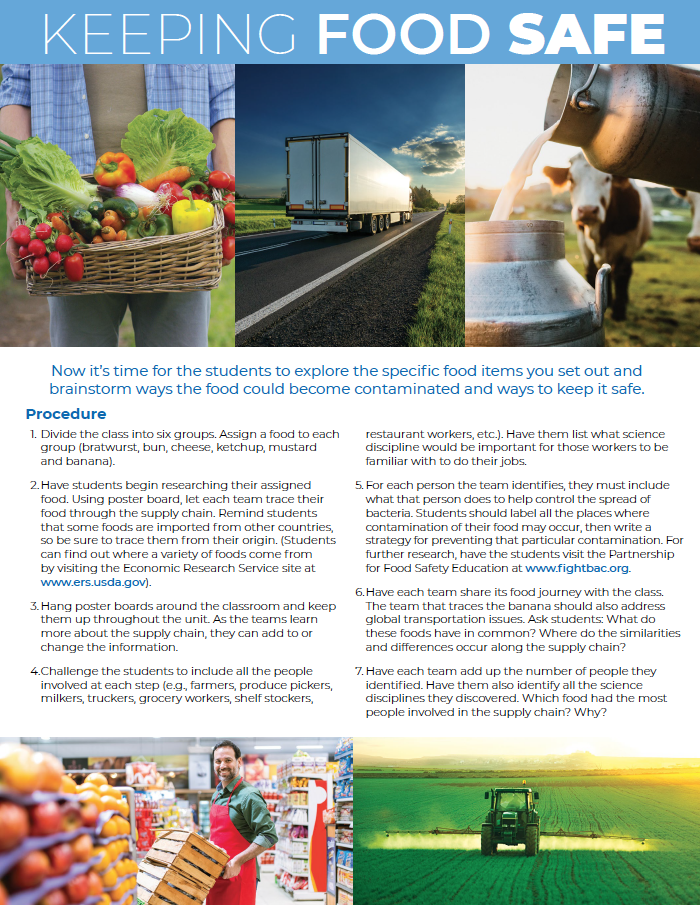 Keeping Food Safe explores the fact that real food is grown, not made. This activity will allow students to explore the supply chain and brainstorm ways they would keep our food from being contaminated. 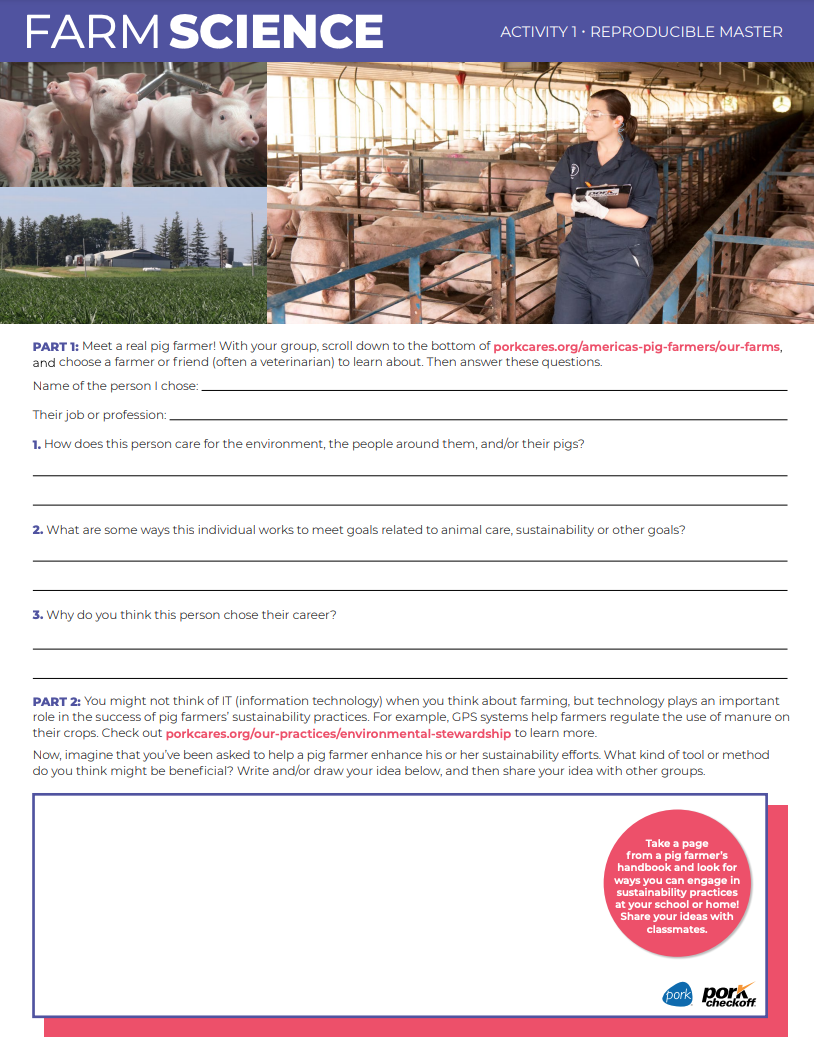 Sustainable Farming explores how safeguarding the environment is important to America’s pork producers and the farmers who work to steward their land for future generations. They will learn that protecting resources is a priority for farmers because their livelihoods depend on it. 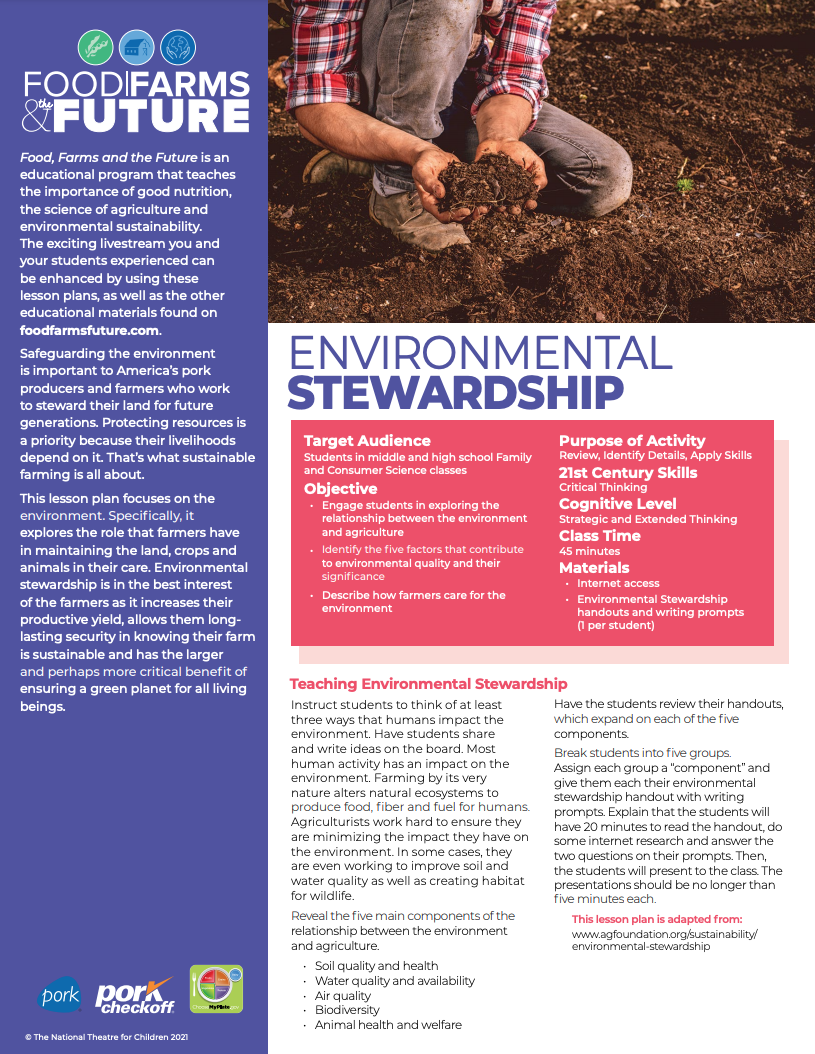 Environmental Stewardship explores the relationship that farmers have in maintaining the land, crops and animals in their care. Environmental stewardship increases farmers’ productive yield, allows them long-lasting security and has the larger benefit of ensuring a green planet for all living beings. 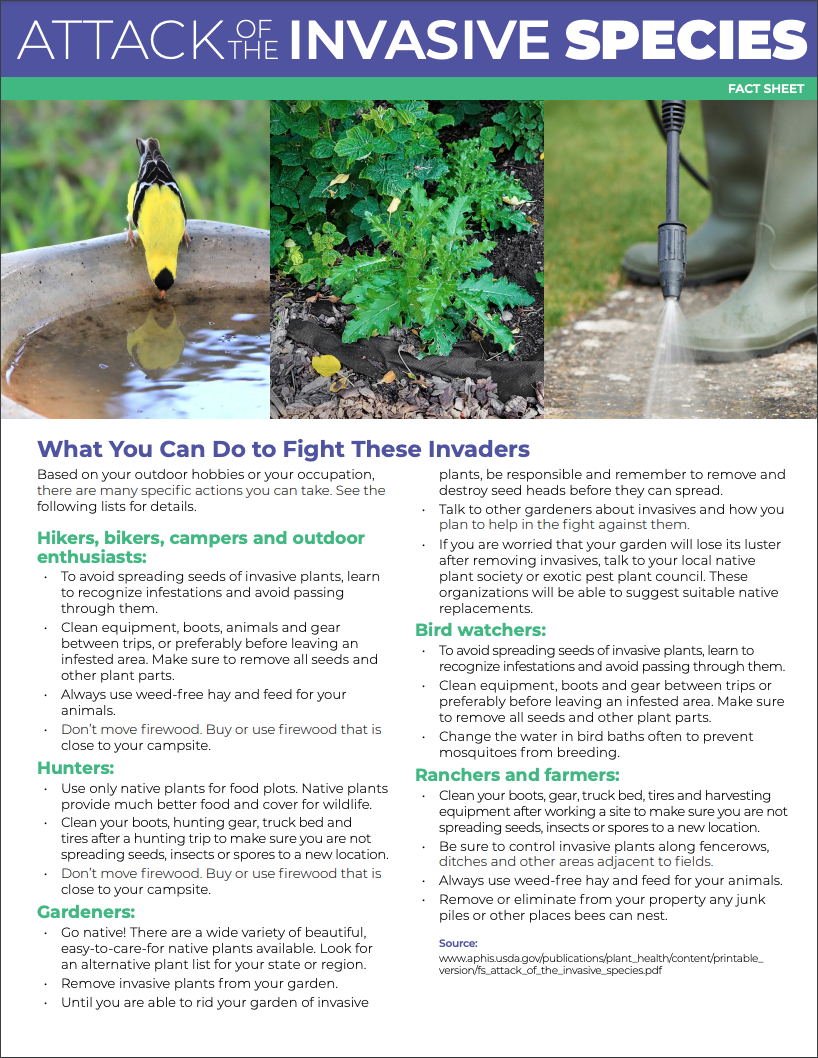 Hungry Pests focuses on invasive insect species. Invasive species can have serious impacts on farming and agriculture. It is important to know what defines an invasive species and some of the effects they can have on modern farming. 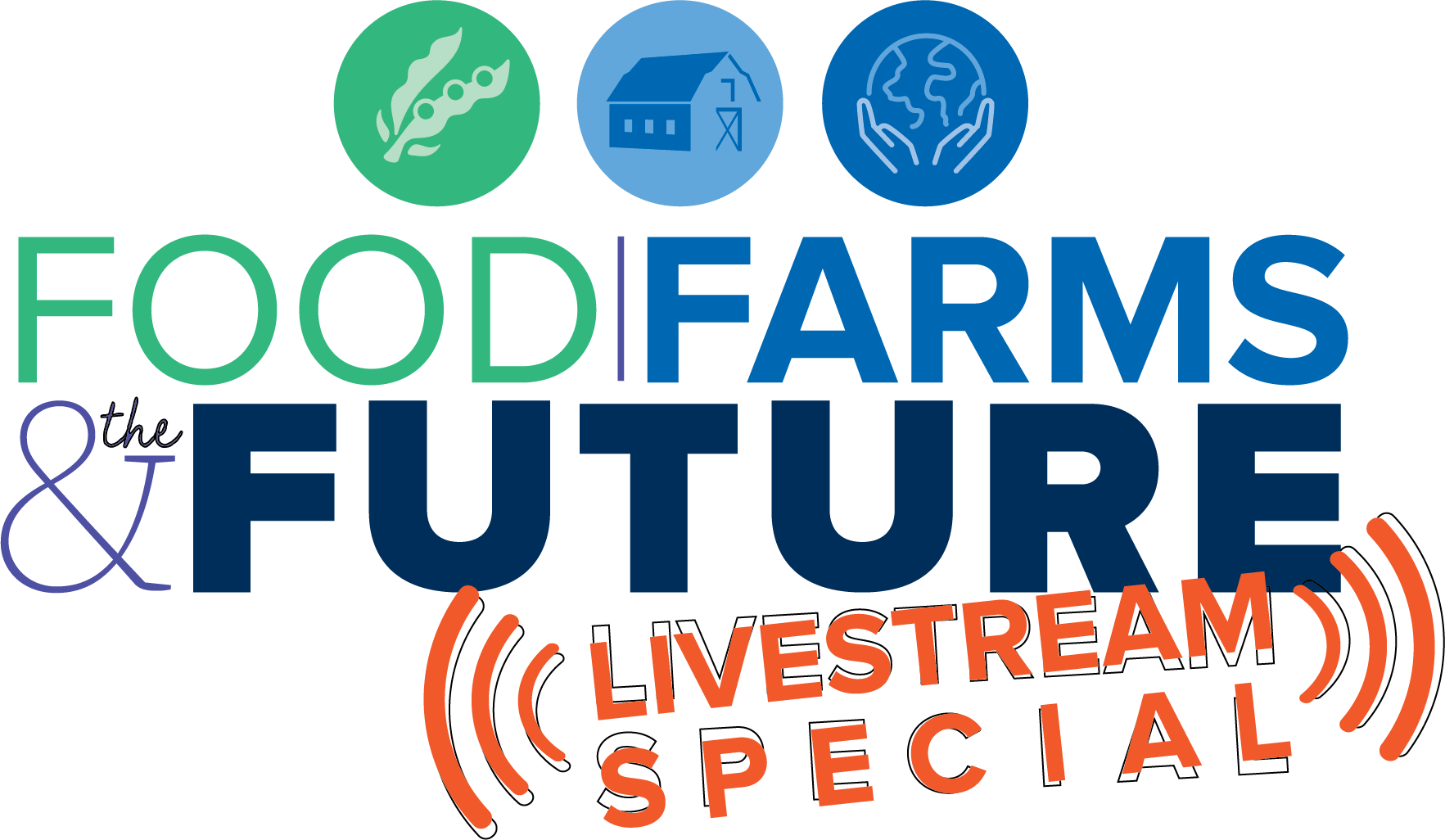 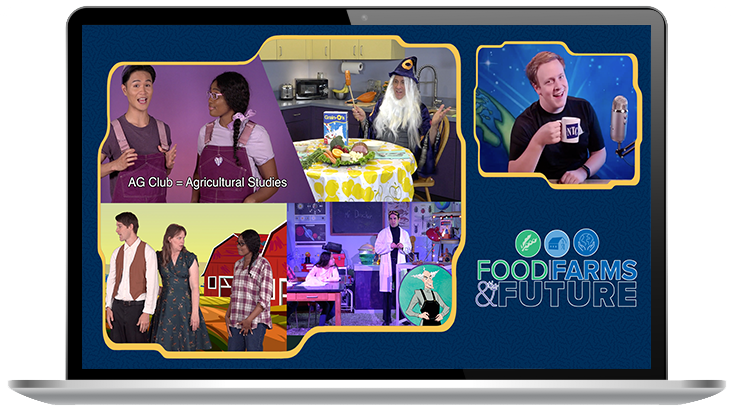 Now that you’ve explored this website, you can book the online show, Food, Farms and the Future, for your classroom or school. Click here to book!